The combination of the two approaches: iterative and incremental has been long-standing and has been widely suggested for large development efforts. Through repeated cycles (iterative) and smaller and simpler portions of the software to be developed at a time (incremental), allowing software developers to take advantage of what was learned during the development of earlier parts or versions of the system. Learning comes from both the development and use of the system, where possible key steps in the process start with a simple implementation of a subset of the system requirements and iteratively enhance the evolving larger (or more complex) versions until the full system is implemented. At each iteration, design modifications are made and new functional capabilities are added.

What is the Incremental Development Process?

An incremental development process works on the basis that work is sliced into pieces (increments). Each increment builds on top of what has gone before. So, fully functioning modules of functionality are built up over time, with each adding to what has already been produced. Iterative development is the process of repeating and refining a cycle/way of working (an iteration). 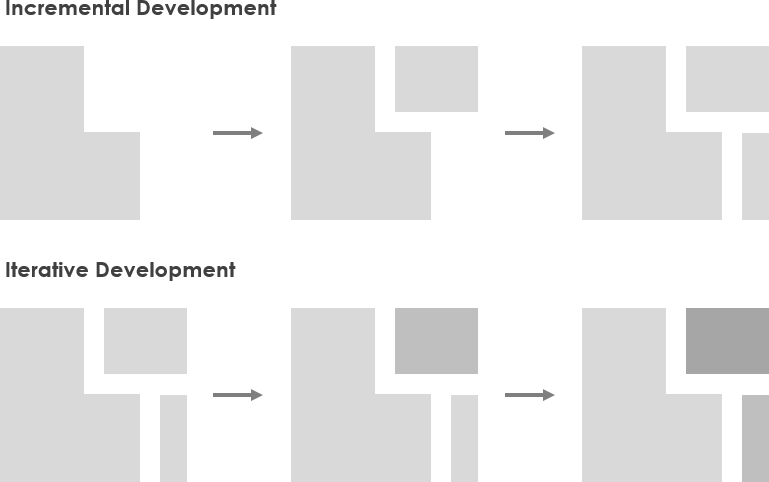 What is the Iterative Development Process?

The iteration involves the redesign and implementation of the iteration are to be simple, straightforward, and modular, supporting redesign at that stage or as a task added to the project control list.[clarification needed] The level of design detail is not dictated by the iterative approach. In a light-weight iterative project, the code may represent the major source of documentation of the system; however, in a critical iterative project, a formal Software Design Document may be used. The analysis of an iteration is based upon user feedback, and the program analysis facilities available. It involves the analysis of the structure, modularity, usability, reliability, efficiency, & achievement of goals. The project control list is modified in light of the analysis results.

Why Agile Approach is both Iterative and Incremental?

Agile approach incorporates the philosophy of iterative and incremental software development that is modeled around a gradual increase in feature additions and a cyclical release and upgrade pattern. The outcome of the subsequent iteration is an enhanced working increment of the product. This is repeated until the product accomplishes the required functionalities.

Agile development such as Scrum, it involves a series of short iterative development cycles (1-4 weeks), and continuous working software demos, user feedback, review and the incremental addition of features at the end and in between iteration as shown in the Figure below:

As mentioned by Mike Cohn, “Scrum and agile are both incremental and iterative. They are iterative in that they plan for the work of one iteration to be improved upon in subsequent iterations. They are incremental because completed work is delivered throughout the project.”

Visual Paradigm provides a rich set of agile tools that help project teams plan and manage their projects. Let’s take a look at some of these features.

User story mapping provides a visually structured approach for scrum teams to manage the product backlog. The visual story map enables the arrangement of product backbone, user tasks, epics, and user stories effectively into a manageable top-down structure, based on the nature, priority, and level of sophistication of map items. 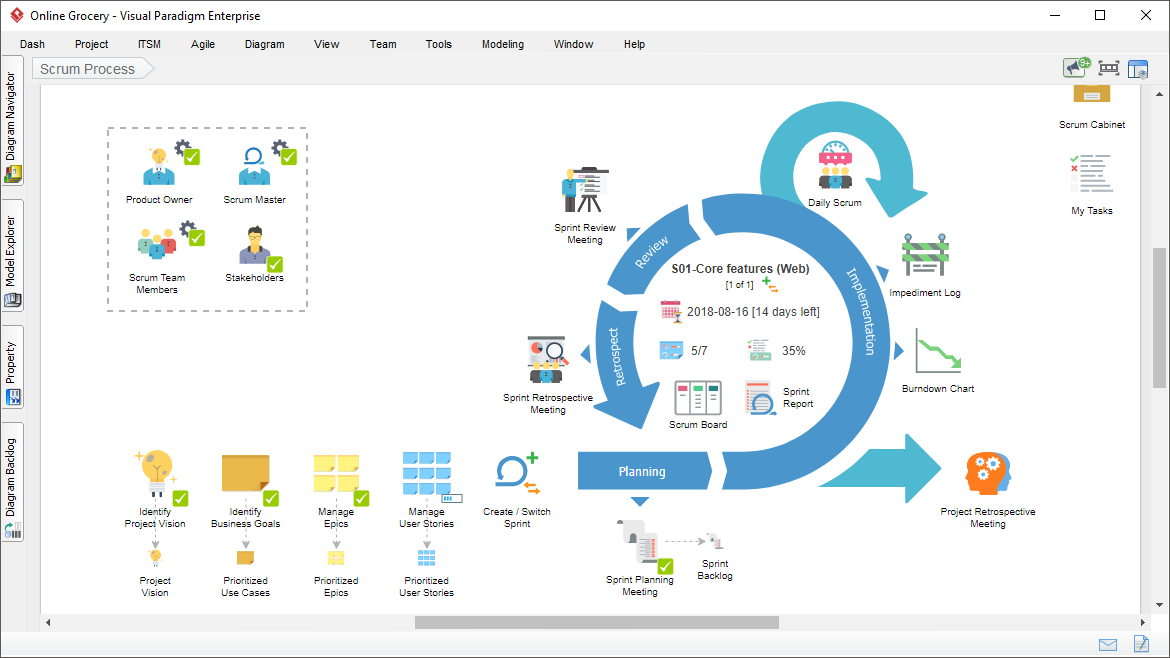 Large-Scale Scrum Canvas is a scrum tool built for every scrum team to plan, track and manage scrum projects through an intuitive visual canvas. Whether your software project involves a single team or multiple teams around the world, we keep everyone on the same page, the same canvas.

Nexus Canvas is a map of actionable Nexus work items. It helps improve project efficiency for product delivery with the Nexus framework.