Activity Diagrams describe how activities are coordinated to provide a service which can be at different levels of abstraction. Typically, an event needs to be achieved by some operation, particularly where the operation is intended to achieve a number of different things that require coordination, or how the events in a single use case relate to one another, in particular, use cases where activities may overlap and require coordination. It is also suitable for modeling how a collection of use cases coordinate to create a workflow for an organization.

When to use Activity Diagram?

Action is a named element which represents a single atomic step within activity i.e. that is not further decomposed within the activity.

Activity represents a behavior that is composed of individual elements that are activity nodes which could be:

A Control Flow represents a transfer of execution control from one action to another action.

It is drawn as a solid line with a line-arrow at one end pointing to the next action.

When the Fill Order action is ended, the execution control is transferred to the Ship Order action.

It represents a decision action that evaluates certain conditions and decides which action path to continue the execution.

Each outgoing control flow should be labeled with the condition that leads to this flow.

The decision action performed after the Receive Order action to check the stock can be drawn in the diagram as shown below: 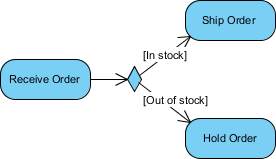 It represents a merge point where multiple alternate execution paths will meet and continue.

The merge point where Ship Order and Hold Order meet can be drawn in the diagram as a Merge Notation as shown below: 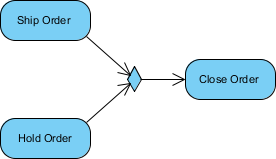 The fork action performed after the Receive Order action to start Ship Order action and Send Invoice action concurrently can be drawn in the diagram as shown below: 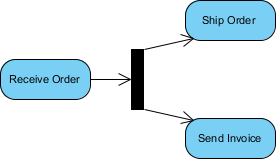 It represents a join action that waits for multiple concurrent execution flows to finish.

Join action performed before the Close Order action to wait for both Ship Order action and Send Invoice action to finish can be drawn as in the diagram as shown below: 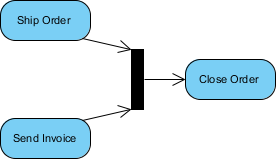 It represents an object which could be an input and/or an output of an action. An object in this case is considered as an instance of a class in a given state.

It is represented by a rectangle with its name placed inside.

It can also be qualified by a state written within brackets below the name.

Order [Filled] object generated from the Fill Order action will be consumed by the Ship Order action. This object can be drawn as an Object Notation in a UML activity diagram as shown below:

It represents a signal action that sends a signal to outside of the activity. The send signal action does not wait for any responses from the receiver of the signal. It ends itself and passes the execution control to the next action.

It is drawn as a convex pentagon with its name placed inside.

The Notify Customer send signal action in an order processing activity can be drawn as a Send Signal Notation in a UML activity diagram as shown below:

Actions and objects in an order processing activity can be divided into 3 groups:

These groups can be drawn as Partition Notations in a UML activity diagram as shown below:

Activity parameters are displayed on the border and listed below the activity name as: parameter-name: parameter-type.

The following example depicts two entry parameters and one output parameter defined for the Activity.

It is used in a UML Activity Diagram to provide a boundary to enclose all actions and objects of the activity. 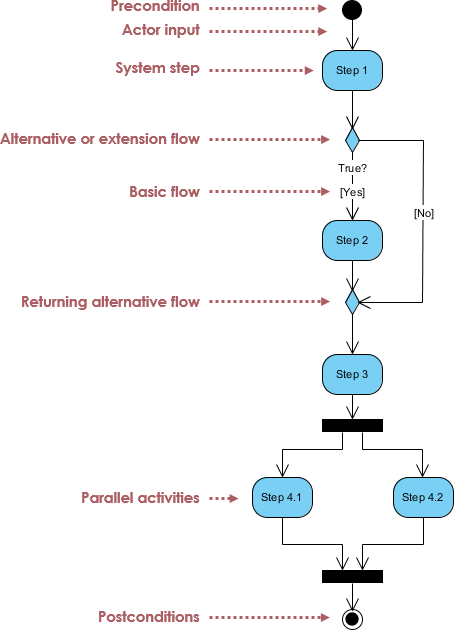 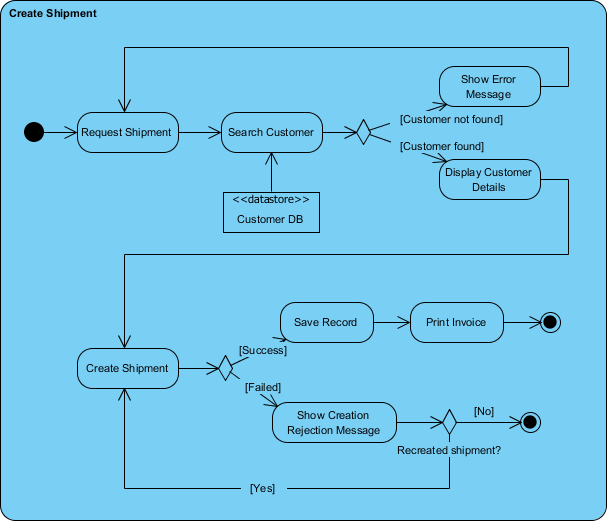 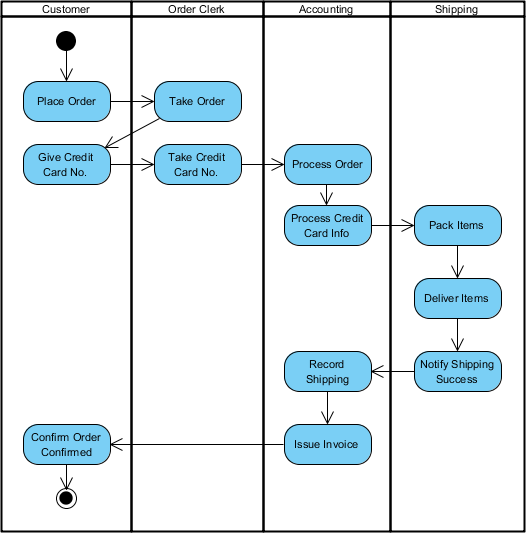