BPMN Orchestration vs Choreography vs Collaboration

Business Process Modeling Notation (BPMN) is a modeling language for illustrating business processes in the form of a diagram similar to a UML activity diagram. BPMN was originally conceived and developed by the Business Process Management Initiative (BPMI). It is currently maintained by the Object Management Group (OMG).

BPMN is designed to cover this wide range of usage and allows modeling of end-to-end business processes to allow the viewer of the Diagram to be able to easily differentiate between sections of a BPMN Diagram. Business process modeling is typically used to communicate a wide variety of information to a wide variety of stakeholders. It often involve multiple agencies (i.e. organizations, companies) cooperate. Thus, BPMN is not only able to model internal processes with in a single pool, but also applicable for public processes for describing the interaction among them as shown in the Figure below:

Orchestration vs Choreography vs Collaboration

Orchestration process is a standard process, we most commonly come across in BPMN. It typically models a single coordinating point of view. An orchestration Process describes a process within a single business entity that is contained within a Pool and normally has a well-formed context.

Choreography process. A new model type in BPMN 2.0 is the Choreography Diagram. Its purpose is to show the interaction between participants in a different format and concentrate on the message flow instead of the individual detailed tasks of a process. Therefore new object types were introduced that include sender and receiver within the object (instead of connecting roles to a task or using swimlanes) and connect the sent/received messages to this object.

A collaboration process depicts the interactions between two or more business entities. These interactions are defined as a sequence of activities that represent the message exchange patterns between the entities involved. A collaboration diagram is quite commonly used and is easily recognized because it consists of more than one Pool. A Pool may be empty, a black box, or may show a process within.

Up to BPMN 1.1 choreographies are represented in the same diagrams as orchestrations. However, the elements that allow for a complete definition of a choreography are still to be defined. In BPMN 2.0, it provide the definition and additional notation for expressing choreography. The figure below shows an example of choreography according to BPMN 1.1:

Choreography diagrams are new in BPMN 2.0 and focus on between-processes interactions and message flows. Another way to look at Choreography is to view it as a type of business 'contract' between two or more organizations.

The following figure shows the interaction between manufacturer and customer in a sale order process. To initiate the process, the customer places an order for an item. The manufacturer then replies the customer with confirmation. 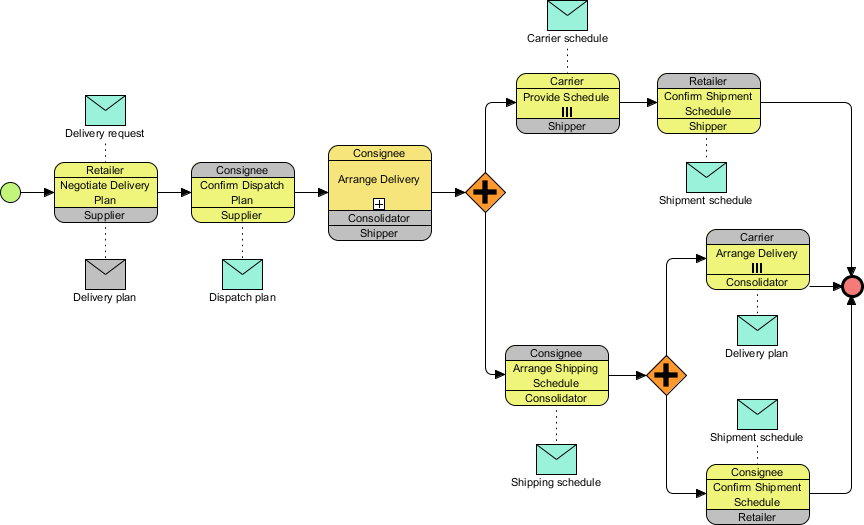 The second new BPMN 2.0 model type - the BPMN Conversation diagram - takes this concept on an even higher level. The Conversation Model is a simplified view of collaboration model. There are only three types of elements in a Conversation Model - pools, communication elements and the links between them. It does not include process logic. In fact, it shows only the conversations between the participants in a 30,000 foot view as conversation objects (hexagons) without showing the individual message flow. 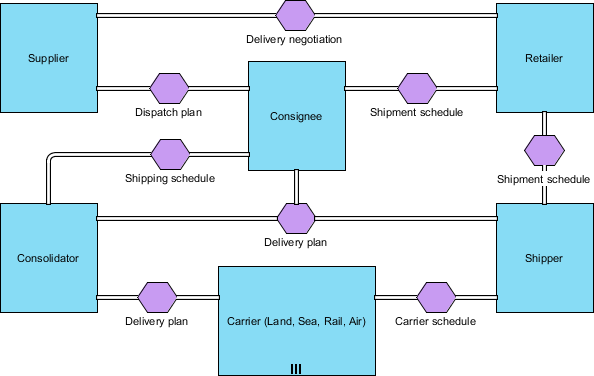