What is Unified Architecture Framework

UAF meets the specific business, operational and systems-of-systems integration needs of commercial and industrial enterprises as well as the most current version of:

The Unified Profile for DoDAF/MODAF (UPDM) is a UML Profile (customization package) that provides a consistent, standardized means to describe DoDAF, MODAF and NAF architectures in UML-based tools as well as a standard for interchange.

The goals of UPDM are to significantly enhance the quality, productivity, and effectiveness associated with enterprise and system of systems architecture modeling, promote architecture model reuse and maintainability, improve tool interoperability and communications between stakeholders, and reduce training impacts due to different tool implementations and semantics.

In March 2008, the UPDM Group was re-formed by members of INCOSE and the OMG to create the Unified Profile for DoDAF and MODAF (UPDM) using UML/SysML. Members of the UPDM Group were tool vendors, members of industry and representatives from the US DoD, British MOD, NATO, Canadian and Swedish armed forces. The Figure shows below the evolution and relationships between DoDAF, MODAF, DNDAF, and NAF. 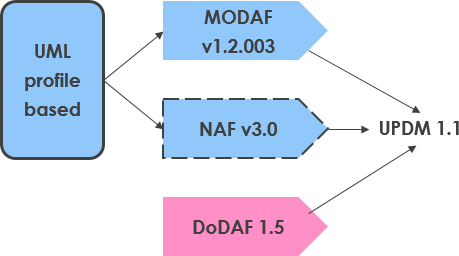 The motivation of UAF?

UAF architecture models provide a means to develop an understanding of the complex systems and the relationships that exist between organizations, systems, and systems-of-systems and enable the analysis of these systems to ensure that they meet the expectations of the user community.

Transiting From UPDM to UAF 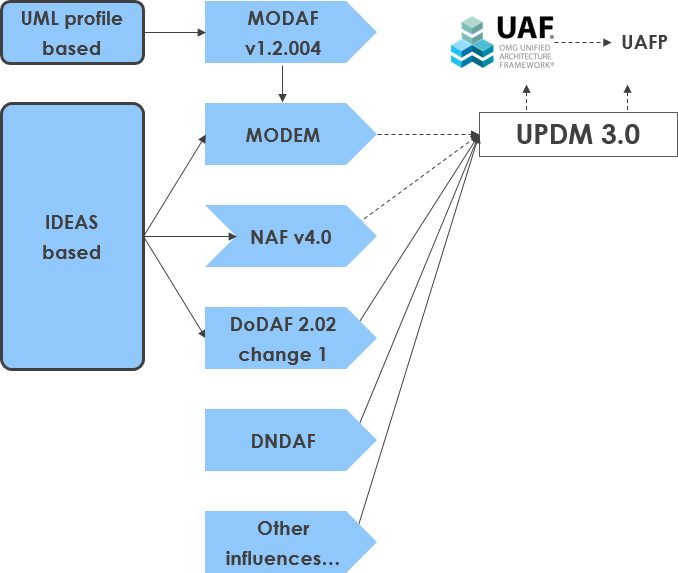 The OMG UAF is the next stage in the development of UPDM; it takes the principles of UPDM and extends it to reach a wider audience. As well as encompassing DoDAF, MODAF, and NAF, UAF also includes views that can capture human-machine interface and human factors concerns, security analysis, and systems-of-systems lifecycle concepts. Because of this expansion in scope, it became necessary to change the way views were represented in UPDM.

This resulted in the definition of a grid-based approach that separates the meta-model from the view specification and a specific architecture framework representation.