Adaptive vs Predictive Planning: When Agile? When Waterfall?

Project work ranges from definable work to high-uncertainty work. Definable work projects are characterized by clear procedures that have proved successful on similar projects in the past. The production of a car, electrical appliance, or home after the design is complete are examples of definable work. The production domain and processes involved are usually well understood and there are typically low levels of execution uncertainty and risk.

The traditional Project Management (waterfall, also known as plan-driven) approach is linear where all the phases of a process occur in a sequence. The approach depends on predictable tools and predictable experience. Each and every project follows the same life cycle which includes the stages such as feasibility, plan, design, build, test, production, support, as shown in the figure below.

The entire project is planned upfront without any scope for changing requirements, such as PMI’s PMBOK, and PRINCE2 are all rigid and highly controlled. They outline distinct stages for project planning from start to finish and assume that you have all the requirements and information you need upfront. 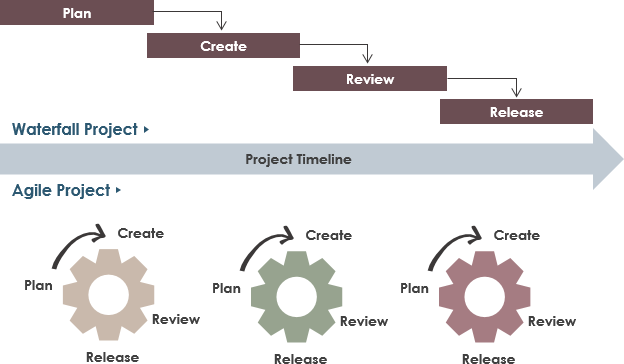 When a traditional system focuses on upfront planning where factors like cost, scope, and time are given importance, the agile approach gives prominence to teamwork, customer collaboration, and flexibility. As requirements specifications change, the agile team can remain mobile and able to respond to those changes. However, that doesn’t necessarily mean that the adaptive planning strategy is always better than a predictive planning strategy. Let’s compare these two project development strategies in further detail.

Waterfall project management is a more predictive planning strategy that utilizes specific steps and milestones to control the process. A predictive planning strategy may fail when confronted by significant project specification changes or customer modifications, but it will also be more likely to generate the anticipated result. Agile methodologies can be more susceptible to project evolution and scope creep, whereas waterfall strategies will create a more consistent final product.

Waterfall approach is a sequential process that is broken into a number of stages. The development team needs to complete one phase before proceeding to the next development phase. Typically, there are 5 phases in the waterfall development process which are listed below:

High-uncertainty projects have high rates of change, complexity, and risk. These characteristics can present problems for traditional predictive approaches that aim to determine the bulk of the requirements upfront and control changes through a change request process. Instead, agile approaches were created to explore feasibility in short cycles and quickly adapt based on evaluation and feedback.

Agile rejects these traditional project management methodologies as cumbersome, restrictive, and unsuitable for the new era of speed. Agile project management is iterative and aims at constantly incorporating user feedback and continuous releases with every iteration of the software development project as shown in the Figure above. Every task output is a product you’re selling to stakeholders. Team and work structures are designed around creating things that are directly useful to the customer or client. 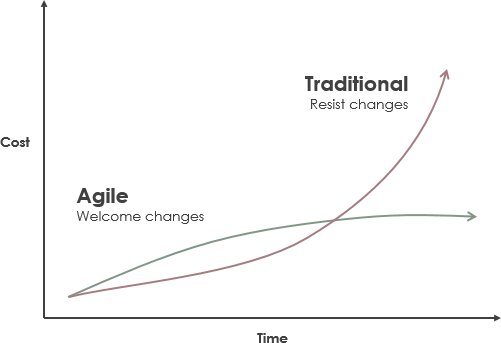