What is a Software Process Model?

Software processes, methodologies and frameworks range from specific prescriptive steps that can be used directly by an organization in day-to-day work, to flexible frameworks that an organization uses to generate a custom set of steps tailored to the needs of a specific project or group. In some cases a “sponsor” or “maintenance” organization distributes an official set of documents that describe the process.

One of the basic notions of the software development process is SDLC models which stands for Software Development Life Cycle models. There are many development life cycle models that have been developed in order to achieve different required objectives. The models specify the various stages of the process and the order in which they are carried out. The most used, popular and important SDLC models are given below:

The waterfall model is a breakdown of project activities into linear sequential phases, where each phase depends on the deliverables of the previous one and corresponds to a specialisation of tasks. The approach is typical for certain areas of engineering design. 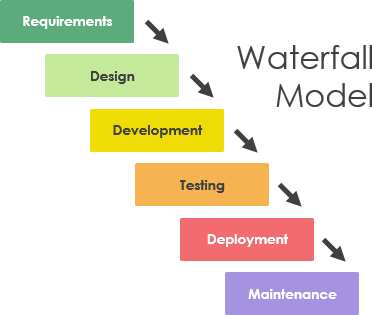 The V-model represents a development process that may be considered an extension of the waterfall model and is an example of the more general V-model. Instead of moving down in a linear way, the process steps are bent upwards after the coding phase, to form the typical V shape. The V-Model demonstrates the relationships between each phase of the development life cycle and its associated phase of testing. The horizontal and vertical axes represent time or project completeness (left-to-right) and level of abstraction (coarsest-grain abstraction uppermost), respectively. 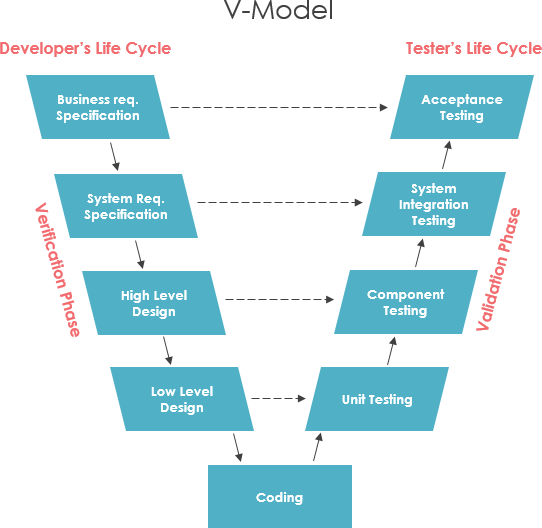 The incremental build model is a method of software development where the model is designed, implemented and tested incrementally (a little more is added each time) until the product is finished. It involves both development and maintenance. The product is defined as finished when it satisfies all of its requirements. Each iteration passes through the requirements, design, coding and testing phases. And each subsequent release of the system adds function to the previous release until all designed functionally has been implemented. This model combines the elements of the waterfall model with the iterative philosophy of prototyping.

An iterative life cycle model does not attempt to start with a full specification of requirements by first focusing on an initial, simplified set user features, which then progressively gains more complexity and a broader set of features until the targeted system is complete. When adopting the iterative approach, the philosophy of incremental development will also often be used liberally and interchangeably.

Rapid application development was a response to plan-driven waterfall processes, developed in the 1970s and 1980s, such as the Structured Systems Analysis and Design Method (SSADM). Rapid application development (RAD) is often referred as the adaptive software development. RAD is an incremental prototyping approach to software development that end users can produce better feedback when examining a live system, as opposed to working strictly with documentation. It puts less emphasis on planning and more emphasis on an adaptive process.

RAD may resulted in a lower level of rejection when the application is placed into production, but this success most often comes at the expense of a dramatic overruns in project costs and schedule. RAD approach is especially well suited for developing software that is driven by user interface requirements. Thus, some GUI builders are often called rapid application development tools.

The spiral model, first described by Barry Boehm in 1986, is a risk-driven software development process model which was introduced for dealing with the shortcomings in the traditional waterfall model. A spiral model looks like a spiral with many loops. The exact number of loops of the spiral is unknown and can vary from project to project. This model supports risk handling, and the project is delivered in loops. Each loop of the spiral is called a Phase of the software development process. 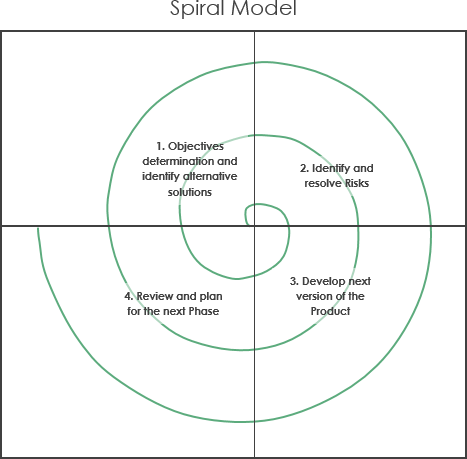 Agile is an umbrella term for a set of methods and practices based on the values and principles expressed in the Agile Manifesto that is a way of thinking that enables teams and businesses to innovate, quickly respond to changing demand, while mitigating risk. Organizations can be agile using many of the available frameworks available such as Scrum, Kanban, Lean, Extreme Programming (XP) and etc. 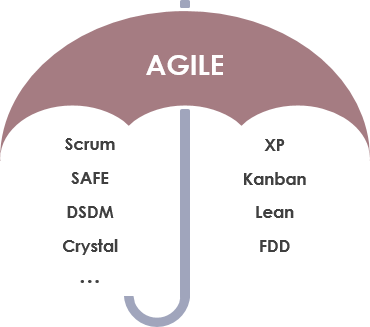 The Agile movement proposes alternatives to traditional project management. Agile approaches are typically used in software development to help businesses respond to unpredictability which refer to a group of software development methodologies based on iterative development, where requirements and solutions evolve through collaboration between self-organizing cross-functional teams.

The primary goal of being Agile is empowered the development team the ability to create and respond to change in order to succeed in an uncertain and turbulent environment. Agile software development approach is typically operated in rapid and small cycles. This results in more frequent incremental releases with each release building on previous functionality. Thorough testing is done to ensure that software quality is maintained. 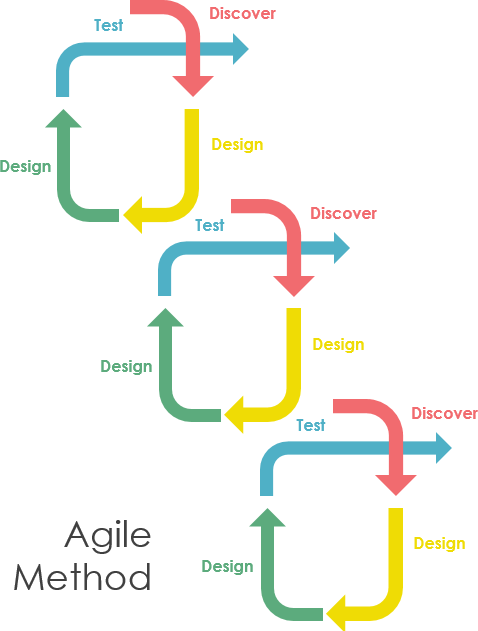 Kick-start any size of IT projects with automated guide-through process, with step-by-step instruction, input references and samples. Develop deliverables incrementally and collaboratively with your team members. 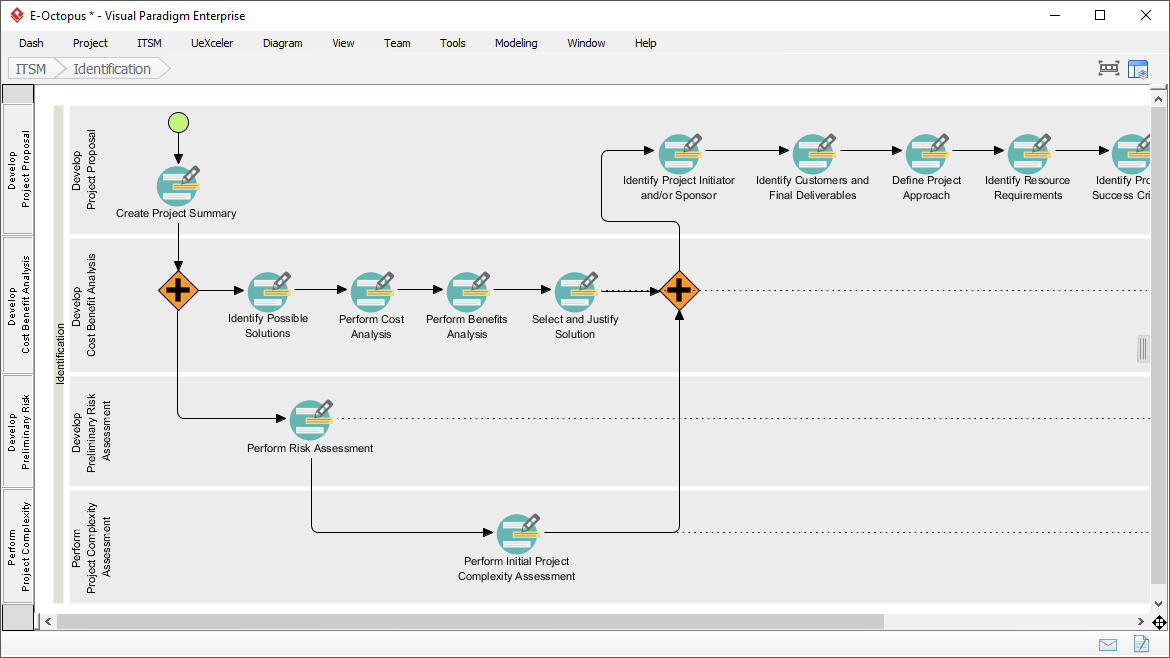 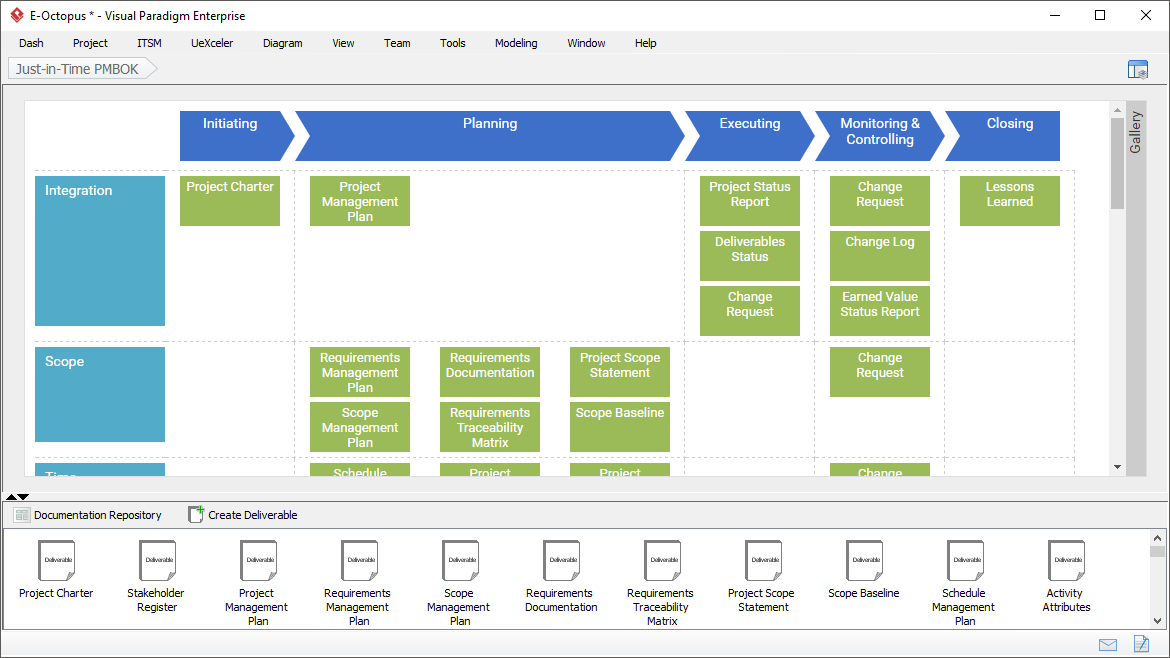