What is Four Corners Analysis?

The Four Corners Analysis, developed Michael Porter, is a model well designed to help company strategists assess a competitor's intent and objectives, and the strengths it is using to achieve them. It is a useful technique to evaluate competitors and generate insights concerning likely competitor strategy changes and determine competitor reaction to environmental changes and industry shifts. By examining a competitor's current strategy, future goals, assumptions about the market, and core capabilities, the Four Corners Model helps analysts address four core questions: 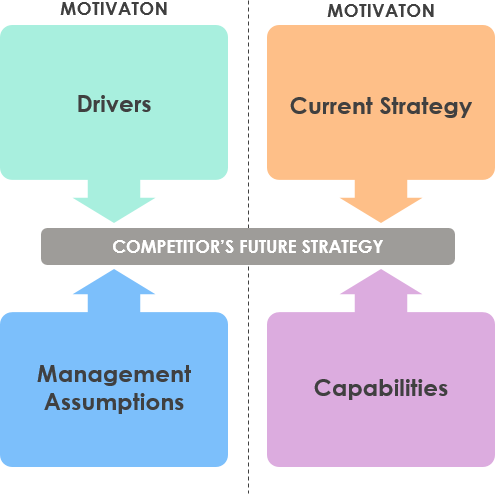 From there, you can identify a competitive strategy that manoeuvres around the rival's objectives and strengths, and that plays to your company's capabilities.

Porter's Four Corners tool has been around for a long time and it's earned a place for itself as a useful and respected management tool. The real advantage of this approach is:

The four corners refer to the four elements that are critical in analyzing a market rival, including independently and collectively assessing its: drivers / future goals, management assumptions, strategy and capabilities. Unlike the other static models (i.e. SWOT Analysis) that they don't actually help the analyst understand what would motivate a competitor to take particular actions, the four corners method was developed to capture insights about what competitors plan to do from the present forward. Now, let's take a look of the four component of the analysis:

Analyzing a competitor's goals assists in understanding whether they are satisfied with their current performance and market position. This helps predict how they might react to external forces and how likely it is that they will change strategy. We may brainstorm by considering the following points:

The perceptions and assumptions that a competitor has about itself, the industry and other companies will influence its strategic decisions. Analyzing these assumptions can help identify the competitor's biases and blind spots. We may brainstorm by considering the following points:

A company's strategy determines how a competitor competes in the market. However, there can be a difference between 'intended strategy' (the strategy as stated in annual reports, interviews and public statements) and the 'realised strategy' (the strategy that the company is following in practice, as evidenced by acquisitions, capital expenditure and new product development). Where the current strategy is yielding satisfactory results, it is reasonable to assume that an organisation will continue to compete in the same way as it currently does. We may brainstorm by considering the following points:

The drivers, assumptions and strategy of an organisation will determine the nature, likelihood and timing of a competitor's actions. However, an organisation's capabilities will determine its ability to initiate or respond to external forces. We may brainstorm by considering the following points:

The figure below shows a Four Corners Analysis Example that involves the strategic analysis of a rival fast food restaurant. 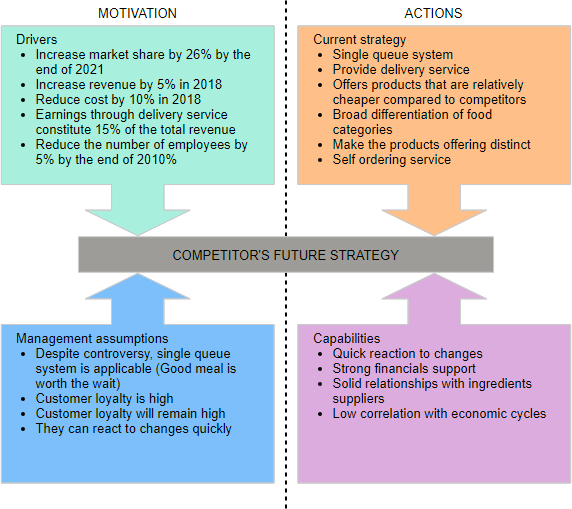