All You Need to Know about State Diagrams

You use state machines to model the behavior of any modeling element, although, most commonly, that will be a class, a use case, or an entire system which focuses on the event-ordered behavior of an object, which is especially useful in modeling reactive systems.

Key Concepts of a State Machine

The Figure below shows the key elements of a state diagram in UML. This notation permits you to visualize the behavior of an object in a way that lets you emphasize the important elements in the life of that object.

A state machine is a behavior that specifies the sequences of states an object goes through during its lifetime in response to events, together with its responses to those events.

A state is a condition or situation during the life of an object during which it satisfies some condition, performs some activity, or waits for some event.

An event is the specification of a significant occurrence that has a location in time and space. In the context of state machines, an event is an occurrence of a stimulus that can trigger a state transition.

A transition is a relationship between two states indicating that an object in the first state will perform certain actions and enter the second state when a specified event occurs and specified conditions are satisfied. Activity is an ongoing non-atomic execution within a state machine.

An action is an executable atomic computation that results in a change in the state of the model or the return of a value. 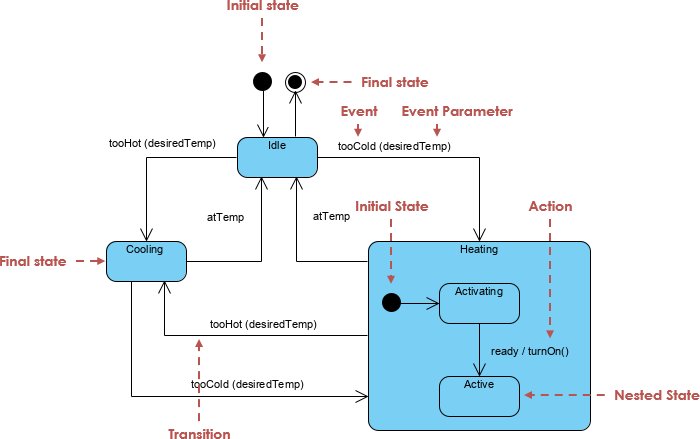 In State Machines the vertices represent states of an object in a class and edges represent occurrences of events. The additional notations capture how activities are coordinated. Objects have behaviors and states. The state of an object depends on its current activity or condition. A State Machine Diagrams shows the possible states of the object and the transitions that cause a change in state.

Take a look at the State Machine Diagram below. It models the transitioning of states for an incident. Such a state diagram focuses on a set of attributes of a single abstraction (object, system).

Suppose you’re designing a toaster. You would build plenty of UML diagrams, but here only state diagrams will be of our interest. Suppose we are interested to model

“What are the steps of making a toast?”

First of all we must turn on the toaster, put in the bread and wait for several minutes to bake it. The initial state diagram is shown below:

Refine the State Machine to Cope With Burning Out

Let’s refine the state machine example above to prevent burning out the bread, heater of the toaster must produce heat in temperature interval (upper and lower temperature limits).

With this new state, the extended state diagram will be:

How to Use Super-State / Sub-State for Toaster

We can partition working and idle as state and encapsulate the detailed state inside each of them. The transition will be made between working and ideal state: 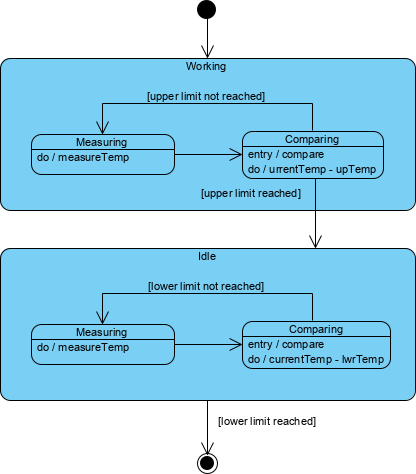 Sub-states in working and idle states are very similar. Both of them measure and compare states, but differentiates in the process of temperature comparison.

In the toaster example above: 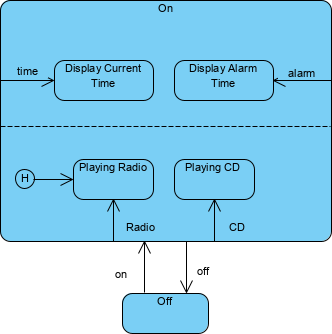 An example of history state usage is presented in Diagram below. 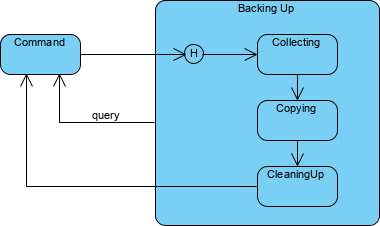 Associating State Diagram with a Class

You can associate a state machine with a class, which is especially useful when modeling event-driven systems or when modeling the lifetime of a class. In these cases, you can also show the state of this machine for a given object at a given time. For example, as class shows below, the object c (an instance of the class Phone) is indicated in the state WaitingForAnswer, a named state defined in the state machine for Phone.