Traditionally, a project is organized around component teams (i.e. UX, Dev, Business, Tester, and …), any release that requires a range of component expertise will need to involve multiple component teams. Typically, different teams will have different sets of priorities, which inevitably leads to bottlenecks in the product release cycle.

In contrast to the component team approach, a cross-functional teams are groups consisting of people from different functional areas of the company. – it should be formed not only with technical specialists (Back-end, Front-end developers, QA engineers, etc.) but also consists of members like Business Analysts, Marketing and UX specialists or anyone else taking an active part in the project.

A self-organizing team is a team that has the autonomy to choose how best to accomplish their work, rather than being directed by others outside the team. Unlike traditional management principles, the self-organizing empowered teams are not directed and controlled from the top; rather they evolve from team members participating actively & collectively in all the Scrum practices and events.

“A Self-Organization Team consists of a group of knowledge workers have to manage themselves. They have to have autonomy” – Peter Drucker.

The Scrum Guide indicates “The Scrum Team consists of a Product Owner, the Development Team, and a Scrum Master. They are: 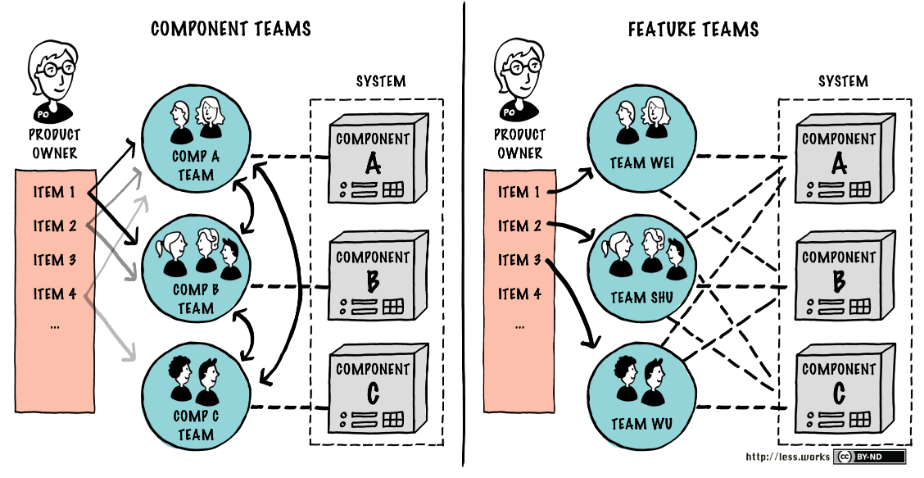 The big disadvantage to the component organization is obvious: it slows value flow. A majority of system features create dependencies that require cooperation between component teams to build, deploy, and ultimately release. Teams spend much of their time discussing dependencies between teams and testing behavior across components rather than being able to deliver end-user value.