What is Unified Modeling Language (UML)?

UML, short for Unified Modeling Language, is a standardized modeling language consisting of an integrated set of diagrams, developed to help system and software developers for specifying, visualizing, constructing, and documenting the artifacts of software systems, as well as for business modeling and other non-software systems. The UML represents a collection of best engineering practices that have proven successful in the modeling of large and complex systems. The UML is a very important part of developing object oriented software and the software development process. The UML uses mostly graphical notations to express the design of software projects. Using the UML helps project teams communicate, explore potential designs, and validate the architectural design of the software. In this article, we will give you detailed ideas about what is UML, the history of UML and a description of each UML diagram type, along with UML examples.

The Origin of UML

The goal of UML is to provide a standard notation that can be used by all object-oriented methods and to select and integrate the best elements of precursor notations. UML has been designed for a broad range of applications. Hence, it provides constructs for a broad range of systems and activities (e.g., distributed systems, analysis, system design and deployment).

In 1994, Jim Rumbaugh, the creator of OMT, stunned the software world when he left General Electric and joined Grady Booch at Rational Corp. The aim of the partnership was to merge their ideas into a single, unified method (the working title for the method was indeed the "Unified Method").

By 1995, the creator of OOSE, Ivar Jacobson, had also joined Rational, and his ideas (particularly the concept of "Use Cases") were fed into the new Unified Method - now called the Unified Modelling Language1. The team of Rumbaugh, Booch and Jacobson are affectionately known as the "Three Amigos"

UML has also been influenced by other object-oriented notations:

UML also includes new concepts that were not present in other major methods at the time, such as extension mechanisms and a constraint language.

As the strategic value of software increases for many companies, the industry looks for techniques to automate the production of software and to improve quality and reduce cost and time-to-market. These techniques include component technology, visual programming, patterns and frameworks. Businesses also seek techniques to manage the complexity of systems as they increase in scope and scale. In particular, they recognize the need to solve recurring architectural problems, such as physical distribution, concurrency, replication, security, load balancing and fault tolerance. Additionally, the development for the World Wide Web, while making some things simpler, has exacerbated these architectural problems. The Unified Modeling Language (UML) was designed to respond to these needs. The primary goals in the design of the UML summarize by Page-Jones in Fundamental Object-Oriented Design in UML as follows:

Before we begin to look at the theory of the UML, we are going to take a very brief run through some of the major concepts of the UML.

The first thing to notice about the UML is that there are a lot of different diagrams (models) to get used to. The reason for this is that it is possible to look at a system from many different viewpoints. A software development will have many stakeholders playing a part.


All of these people are interested in different aspects of the system, and each of them require a different level of detail. For example, a coder needs to understand the design of the system and be able to convert the design to a low level code. By contrast, a technical writer is interested in the behavior of the system as a whole, and needs to understand how the product functions. The UML attempts to provide a language so expressive that all stakeholders can benefit from at least one UML diagram.

Here's a quick look at each one of these 13 diagrams in as shown in the UML 2 Diagram Structure below:


Behavior diagrams show the dynamic behavior of the objects in a system, which can be described as a series of changes to the system over time, there are seven types of behavior diagrams as follows:

What is a Class Diagram?

The class diagram is a central modeling technique that runs through nearly all object-oriented methods. This diagram describes the types of objects in the system and various kinds of static relationships which exist between them.

There are three principal kinds of relationships which are important:

What is a Deployment Diagram?

The Deployment Diagram helps to model the physical aspect of an Object-Oriented software system. It is a structure diagram which shows architecture of the system as deployment (distribution) of software artifacts to deployment targets. Artifacts represent concrete elements in the physical world that are the result of a development process. It models the run-time configuration in a static view and visualizes the distribution of artifacts in an application. In most cases, it involves modeling the hardware configurations together with the software components that lived on. 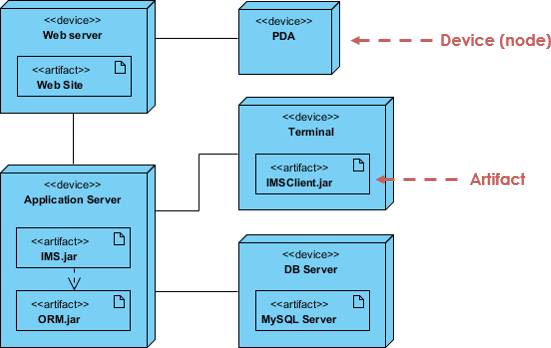 What is an Object Diagram?

But in fact, Class Diagram and Object Diagram represent two different aspects of a code base. In this article, we will provide you with some ideas about these two UML diagrams, what they are, what are their differences and when to use each of them.

You create "classes" when you are programming. For example, in an online banking system you may create classes like 'User', 'Account', 'Transaction', etc. In a classroom management system you may create classes like 'Teacher', 'Student', 'Assignment', etc. In each class, there are attributes and operations that represent the characteristic and behavior of the class. Class Diagram is a UML diagram where you can visualize those classes, along with their attributes, operations and the inter-relationship.

If you are not a fan of those definition stuff, take a look at the following UML diagram examples. I believe that you will understand their differences in seconds.

The following Class Diagram example represents two classes - User and Attachment. A user can upload multiple attachment so the two classes are connected with an association, with 0..* as multiplicity on the Attachment side.

The following Object Diagram example shows you how the object instances of User and Attachment class "look like" at the moment Peter (i.e. the user) is trying to upload two attachments. So there are two Instance Specification for the two attachment objects to be uploaded. 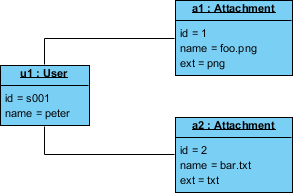 What is a Package Diagram?

Package diagram is UML structure diagram which shows packages and dependencies between the packages. Model diagrams allow to show different views of a system, for example, as multi-layered (aka multi-tiered) application - multi-layered application model.

What is a Composite Structure Diagram?

Composite Structure Diagram is one of the new artifacts added to UML 2.0. A composite structure diagram is similar to a class diagram and is a kind of component diagram mainly used in modeling a system at micro point-of-view, but it depicts individual parts instead of whole classes. It is a type of static structure diagram that shows the internal structure of a class and the collaborations that this structure makes possible.

What is a Profile Diagram?

A profile diagram enables you to create domain and platform specific stereotypes and define the relationships between them. You can create stereotypes by drawing stereotype shapes and relate them with composition or generalization through the resource-centric interface. You can also define and visualize tagged values of stereotypes. 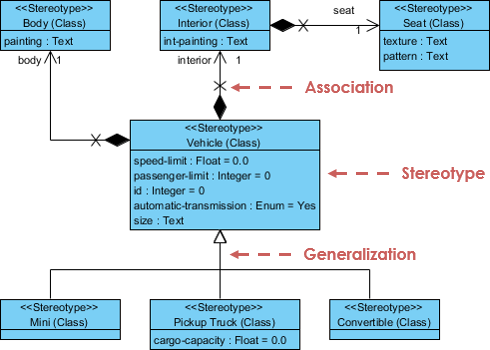 What is a Use Case Diagram?

A use-case model describes a system's functional requirements in terms of use cases. It is a model of the system's intended functionality (use cases) and its environment (actors). Use cases enable you to relate what you need from a system to how the system delivers on those needs.

Think of a use-case model as a menu, much like the menu you'd find in a restaurant. By looking at the menu, you know what's available to you, the individual dishes as well as their prices. You also know what kind of cuisine the restaurant serves: Italian, Mexican, Chinese, and so on. By looking at the menu, you get an overall impression of the dining experience that awaits you in that restaurant. The menu, in effect, "models" the restaurant's behavior. 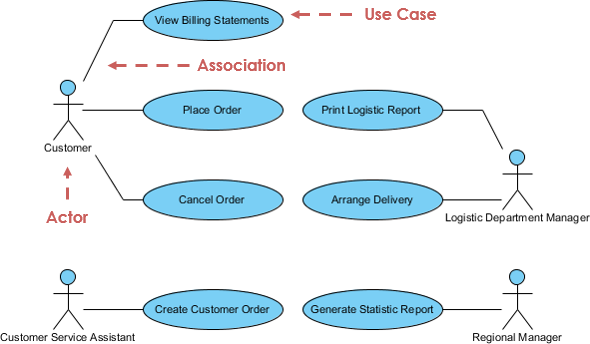 What is an Activity Diagram?

Activity diagrams are graphical representations of workflows of stepwise activities and actions with support for choice, iteration and concurrency. It describes the flow of control of the target system, such as the exploring complex business rules and operations, describing the use case also the business process. In the Unified Modeling Language, activity diagrams are intended to model both computational and organizational processes (i.e. workflows). 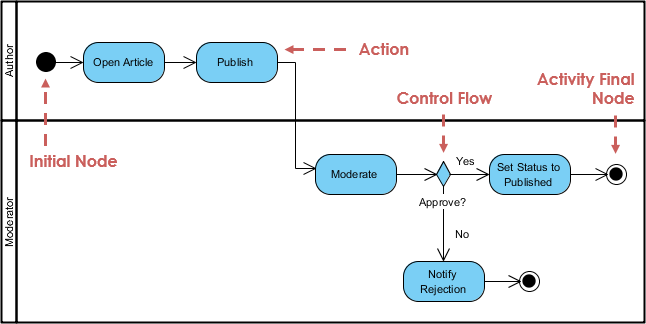 What is a State Machine Diagram?

A state diagram is a type of diagram used in UML to describe the behavior of systems which is based on the concept of state diagrams by David Harel. State diagrams depict the permitted states and transitions as well as the events that effect these transitions. It helps to visualize the entire lifecycle of objects and thus help to provide a better understanding of state-based systems. 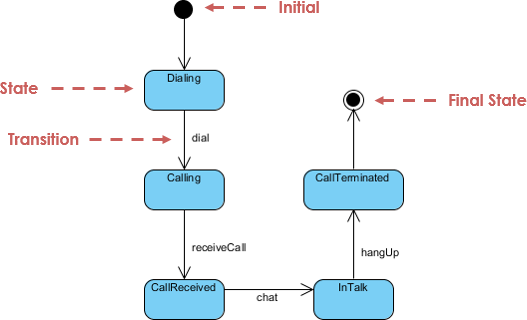 What is a Sequence Diagram?

The Sequence Diagram models the collaboration of objects based on a time sequence. It shows how the objects interact with others in a particular scenario of a use case. With the advanced visual modeling capability, you can create complex sequence diagram in few clicks. Besides, some modeling tool such as Visual Paradigm can generate sequence diagram from the flow of events which you have defined in the use case description. 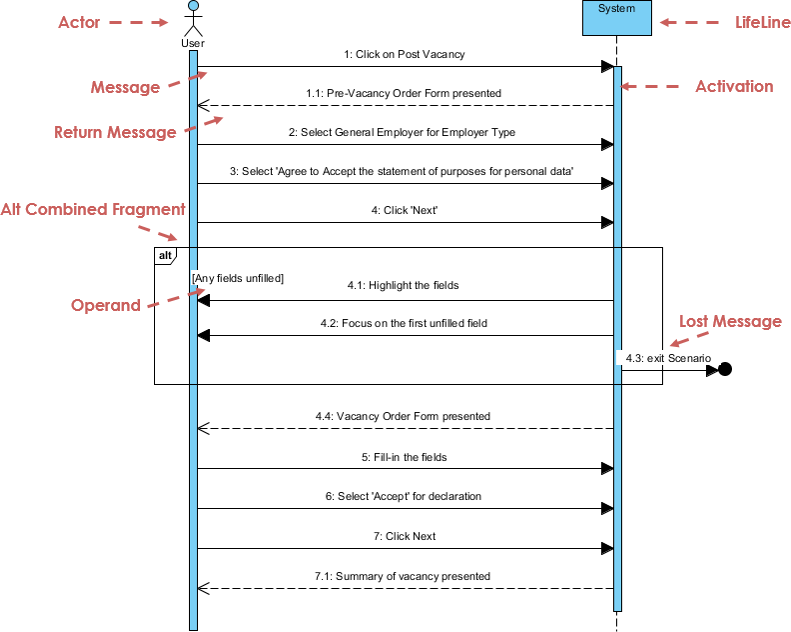 What is a Communication Diagram?

Similar to Sequence Diagram, the Communication Diagram is also used to model the dynamic behavior of the use case. When compare to Sequence Diagram, the Communication Diagram is more focused on showing the collaboration of objects rather than the time sequence. They are actually semantically equivalent, so some of the modeling tool such as, Visual Paradigm allows you to generate it from one to the other. 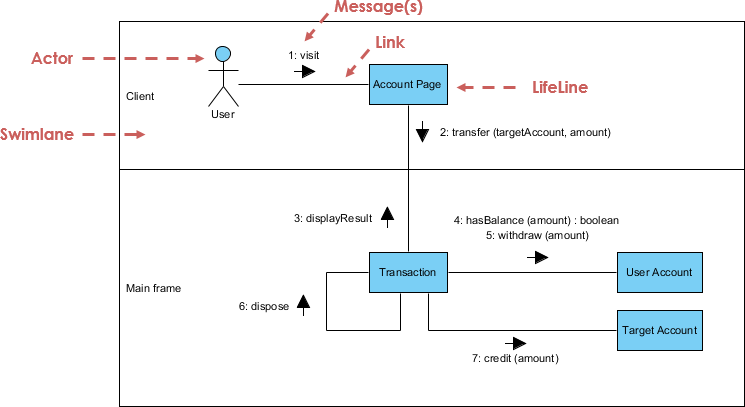 What is Interaction Overview Diagram? 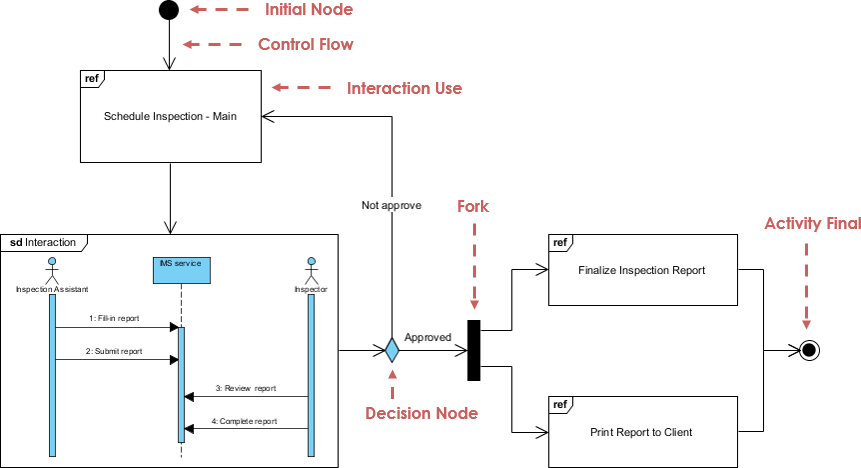 What is Timing Diagram?

Timing Diagram shows the behavior of the object(s) in a given period of time. Timing diagram is a special form of a sequence diagram. The differences between timing diagram and sequence diagram are the axes are reversed so that the time are increase from left to right and the lifelines are shown in separate compartments arranged vertically.

Listed below are some of the best selling UML books you can read to learn UML.